History of the refinery

1978 the first processing line of the refinery was put into operation – complex LK-6U for primary crude oil distillation with capacity of 6 mln. tons per year. 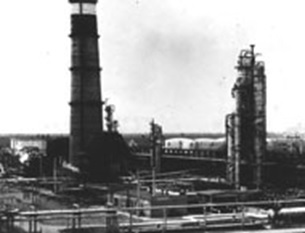 The processing complex LK-6U was intended for processing of West-Siberian blend of crude oil. Starting-up works at the production facilities of the first processing line were conducted by specialists of All-Union Engineering and Producing trust "Orgneftekhimzavody”. Backbone of the personnel of Pavlodar Oil Refinery was made of qualified specialists from other refineries, mostly from Novokuybyshevsk, Ufa, Perm, Omsk. They successfully commissioned the complex LK-6U and mastered its technology ahead of schedule, later on they trained the next generation of Pavlodar oil refiners.

Process flow scheme of the refinery provides the crude oil deep processing, and it is aimed at high-efficiency use of oil by means of rational processing of oil tailings.

For the first time in oil processing industry of the former USSR in 1983 the refinery introduced a new atmospheric residue deep conversion complex KT-1 that became later common use at other refineries.

General projecting of the refinery was handed over in 1985 from the institute “Grozgiproneftekhim” to Omsk subsidiary “VNIPIneft”. 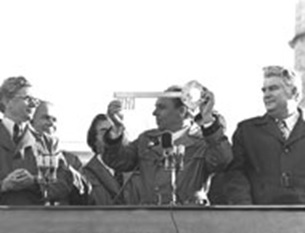 Prize of Council of Ministers of the USSR was awarded for projecting and construction of the first producing line of Pavlodar Oil Refinery in 1983. Workers of the refinery were among honorees.

Pavlodar Oil Refinery was recorded into the State register for partners of external economic relations in 1989 and can maintain export and import supplies. It was the crucial stage in the refinery’s future.

After collapse of the Soviet Union in 1991 the refinery entered into the new period of production relations: all economic relations were ruined, the market should be developed. Direct contracts for sales of over-plan output were the key of market development. Such concepts as customer-owned feedstock/ tolling, oil on substitution base has appeared for the first time in the refinery history.

In the period of 1995 – 1996 there was basically no feedstock, production facilities of refinery stood idle, hard financial situation continued. Way out of crisis was sought for.

In the period of 1997 – 2000 American company “CCL Oil Ltd” became a refinery investor. It was time of tough crisis when the refinery functioned in conditions of feedstock shortage and insufficient financing. Investors failed investing obligations and did not provide stable operation of refinery, so the assets were returned to the state.

Many times during the running of the refinery were changed shareholders and legal status of the enterprise: 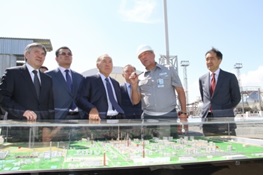 Since beginning of activity of Pavlodar Oil Chemistry Refinery JSC in November 2000 oil processing volume and output of oil products were managed to stabilize and increase, and regular supplies of feedstock were provided.

In August 2009 the refinery merged into JSC “NC “KMG”, it was a positive factor in its further technical and social development. At the head of refinery has become Shukhrat Danbay, General Director of Pavlodar Oil Chemistry Refinery LLP. 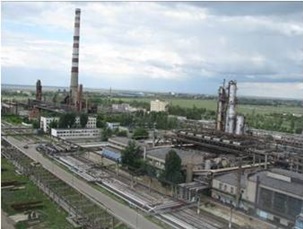 By order of the President of the Republic of Kazakhstan Mr. Nursultan Nazarbayev the State program on modernization of oil refineries of the country, including POCR, is fulfilled nowadays. According to the Agreement on cooperation between “NC “KazMunayGas” JSC and Eni S.p.A (Italy) signed in November 2009, Eni developed the Feasibility Study of POCR Upgrading Project.

On May 28, 2012, POCR signed a three-party service contract on FEED development of the POCR Upgrading Project with Italian company Technip Italy S.p.A. and Kazakhstan company EC Kazgiproneftetrans LLP, which is responsible for FEED adaptation to the regulatory requirements of the Republic of Kazakhstan.

On July 30, 2013 Engineering, Procurement and Construction contract (EPC-contract) with the fixed limit price was concluded with SC Rominserv SRL (Romania). Since that moment POCR Upgrading Project has passed to the practical implementation stage as execution of all works directed to achieve the project guaranteed performance indexes is stipulated by the contract.

In January 2014 Contract with Technip Italy S.p.A on FEED development was terminated, and Contract for FEED development for Phase 1 was concluded with SC Rominserv SRL which in its turn became sole responsible executor of the Project.

The main target of POCR Upgrading Project is to produce motor fuels of ecological class К4,К5 in accordance with the requirements of the Technological Regulation of the Customs Union.

On December 12, 2016 it was successfully completed the works within the limits of Upgrading project on delivery and installation in the design position on POCR of two oversized Diesel Hydrotreating Reactors P-301/1 and P-301/2, weighing more than 500 tones each, for Complex of Crude Oil Primary Distillation (LK-6U). Reactors have gone through over 14 thousand km from Mipo port, Ulsan, South Korea on the Northern Sea Route to POCR, thus opening a perspective way of equipment delivery from around the world to our region. Use of this equipment will allow the refinery to get diesel fuel of ecology class K5 (Euro-5 equivalent). 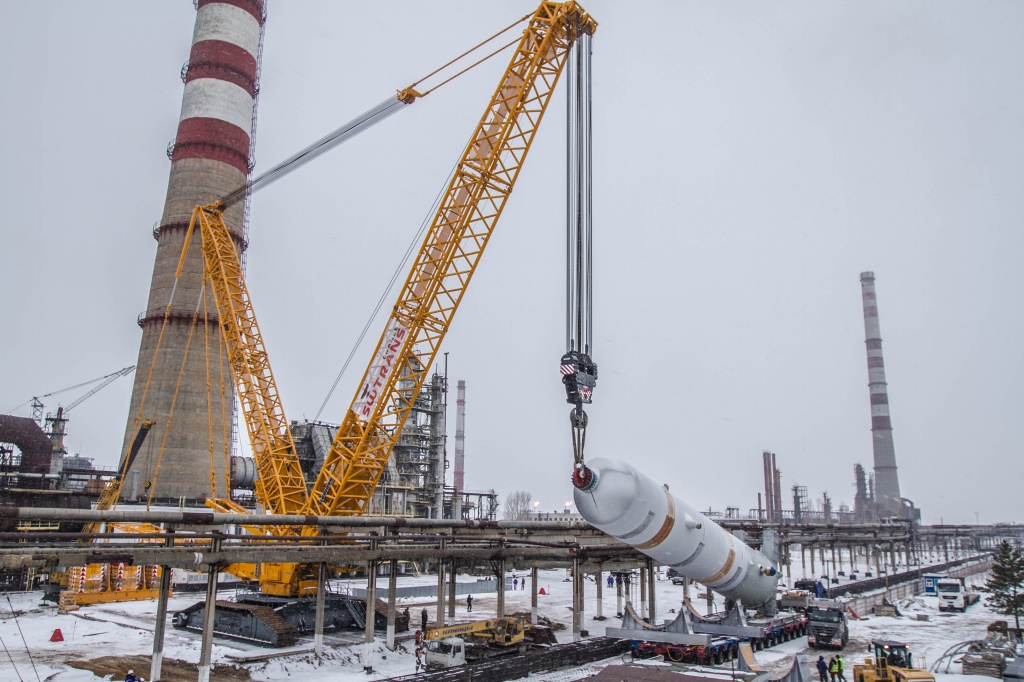 On April 24, 2017 POCR signed the Acts of Mechanical Completion of construction and assembly works on the new process complexes: combined unit of sulfur recovery and isomerization and splitter naphtha, including two reservoirs for high-octane component (isomerate) storage with total capacity of 10 thousand m3 and automatic gasoline blending station with capacity of 2 091 kta.

In July – November 2017 in new built units – combined unit of sulfur recovery and isomerization and naphtha splitter unit – the start-up and commissioning works were completed. The contracted works have been performed accordingly by a Chinese company NFC and by Rominserv SRL. 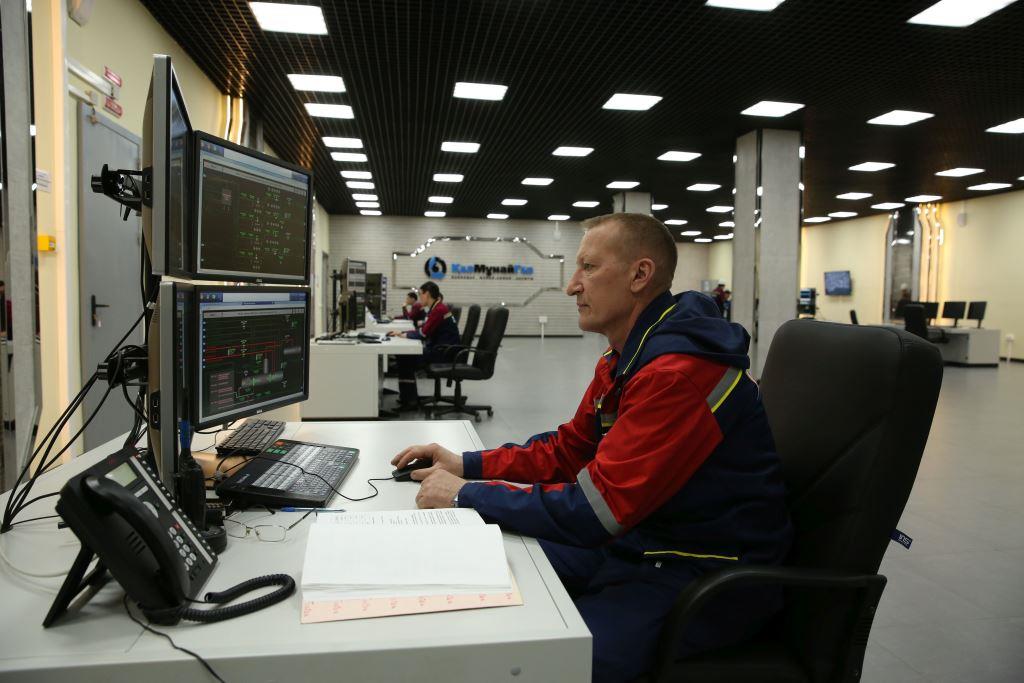 Within the limits of POCR Upgrading Project there was also completed the reconstruction of the existing units:

On November 13, 2017 there was the first batch of gasoline АИ-92 ecological class К4 produced at the Pavlodar Oil Chemistry Refinery LLP. Production of the first batch of new product at Pavlodar Refinery is the result of achieving the main goal of the Project «Reconstruction and Upgrading of POCR LLP» – improvement of motor fuels quality up to ecological classes К4 and К5 in accordance with the requirements of the Technical Regulation of the Customs Union. 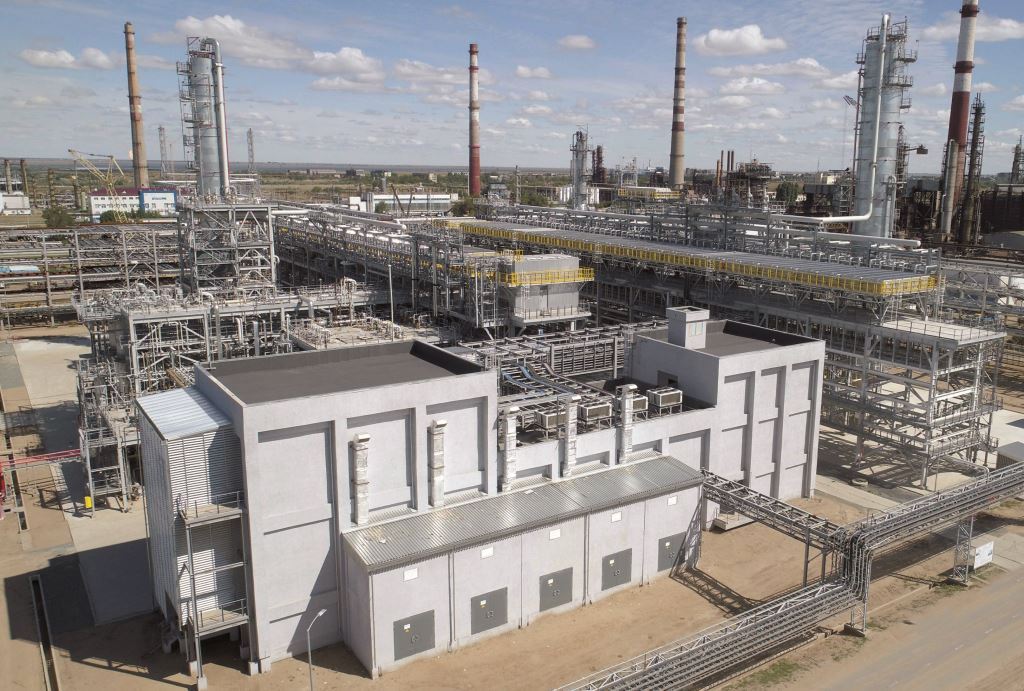 The overhaul repair of 2017 was the longest one in the history of Pavlodar Refinery. It has been related to a large-scale reconstruction of production and transition of POCR to an extended interrepair cycle. During the overhaul repair the whole necessary scope of works has been fulfilled at the refinery, including integration to one unified technological cycle of the existing reconstructed units and new process complexes built under the upgrading project. The deadlines and scope of works of overhaul repair have been estimated taking into account fulfillment of requirements of industrial safety and transition of the refinery to an extended inrerrepair cycle.

To conduct overhaul repair and reconstruction more than 20 subcontractors have been involved to work, number of mobilized specialists from subcontracting agencies was more than 2500 people. Working closely with the personnel of process complexes of Primary Crude Oil Processing, Deep Crude Oil Processing, Heavy Oil Residues Processing, Oil Products Compounding and Loading, Water Supply and Sewage Systems workshop, department of Chief Mechanical Engineer and other refinery’s subdivisions. More than 240 units of equipment and machinery was involved, including a unique fully mobile crane LIEBHER LR11350 with lifting capacity of 1350 tons, provided by a Russian company «СОПиГ» JSC. 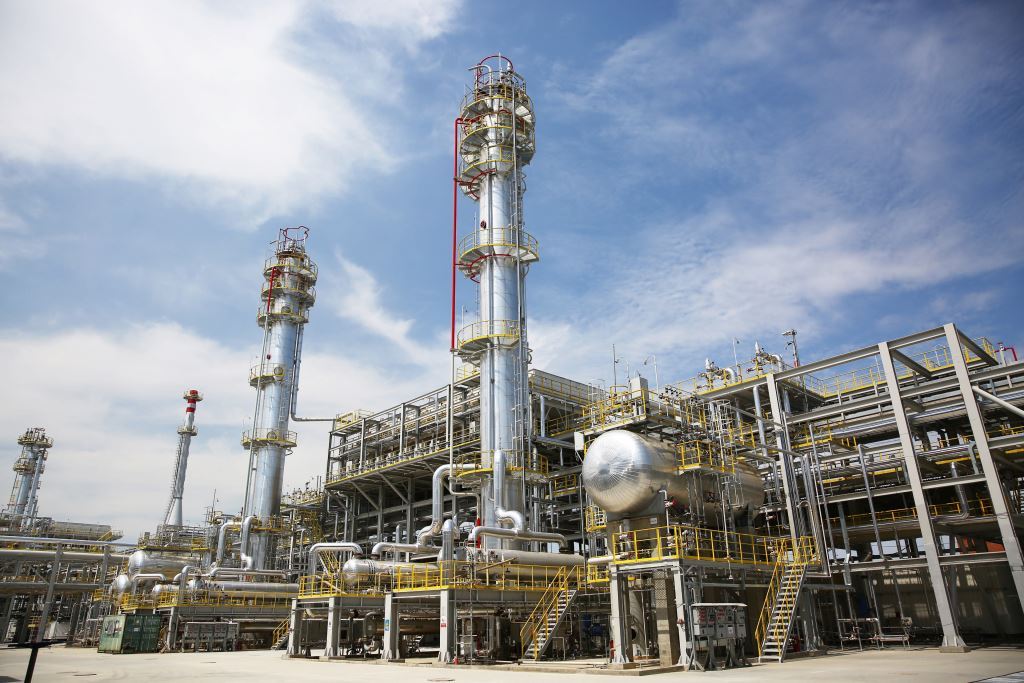 The completion date of POCR Upgrading was considered to be the end of October 2017. There are never big deals without the big difficulties. New built upgraded units were ready but during completion of the works for overhaul repair it was discovered damage in hydrogen production unit, for that it was required the services of high-skilled welder and special equipment. The necessary detail has been ordered in UK, it was delivered to Pavlodar in the end of November by air transport. For its installation the representatives of manufacturing company of steam reformer of HPU «Amec Foster Wheeler» (UK) and people of Errezeta Ltd (Italy) have arrived.

Failure to provide deadlines of overhaul repair of POCR and start-up of the refinery in general upon completion of upgrading have caused challenging situation in the republic in terms of supply of internal market with diesel fuel. The Hydrogen Production Unit has been started up on December 19, 2017. On December 20, 2018 the HPU has been brought to design capacity. Starting from December 22, 2018 at the refinery it was proceeded with production of diesel fuel of К4 class.

On December 25, 2017 after stabilizing operation mode of isomerization unit at the refinery there were all necessary components received for production of motor gasolines К4 in accordance with Technical Regulation of the Customs Union.

By the order №1639 of POCR LLP dated December 28, 2017 it was approved the Operation Commencement Act of completed facilities under the POCR Upgrading Project.

2017 made it into history of the refinery as the year of completion of big projects: POCR Upgrading, reconstruction of the existing production and a large-scale overhaul repair of the plant, aimed to an extension of interrepair cycle. From greenfield there have been two new process complexes built and commissioned: isomerization and naphtha splitter unit and combined unit of sulfur recovery, producing for the country the first batch of eco-friendly local fuel – gasoline and diesel fuel of К4 standard.

Production of fuel of ecological class К4 is made in accordance with: 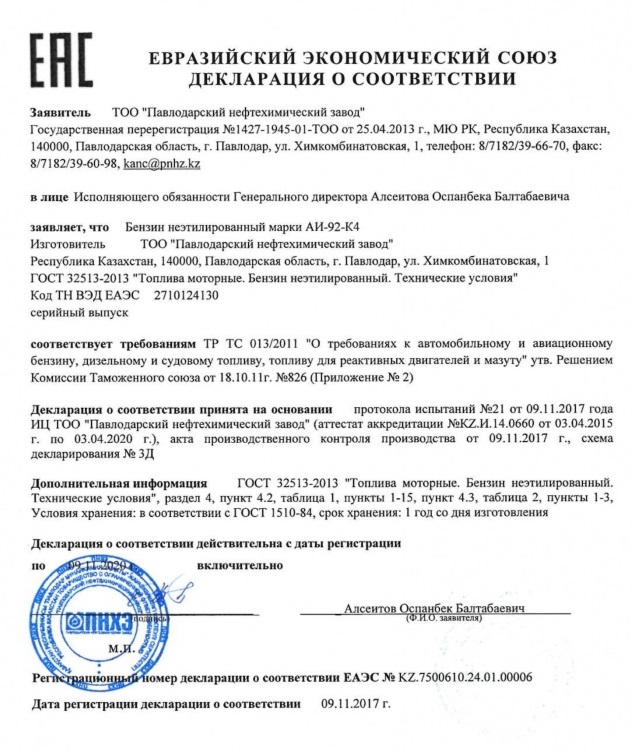 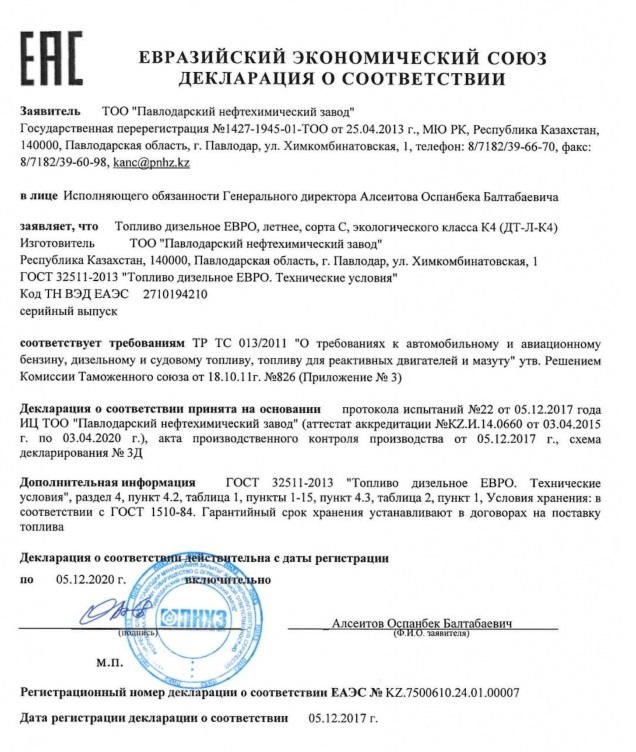 The goal of POCR Upgrading has been achieved. All this has enabled to take the Pavlodar Oil Chemistry Refinery to the whole new level of oil refining.